About Us » School Profile

Santa Clara Academy is a Diocesan Pre-K3 through 8th grade school located in South Dallas (West Oak Cliff Area). The Academy began in the fall of 1994 through the initiative of Bishop Charles V. Grahmann and the Presbyteral Council. The Bishop conducted an in-depth year-long survey to determine what special needs existed in the area. Job opportunities and living conditions were among the most voiced needs, but invariably, the parents articulated an even greater need for a Catholic school education where their children could receive the Holy Sacraments in a crime-free environment. The School, from the beginning, has served children of the area, many of lower income families. Santa Clara’s campus includes 17 classrooms, computer lab, science lab, library, finance office, and secretary/principal’s office. A part of the church is sectioned off as the cafeteria for use during lunch.

Many of our students are from various locations in the Greater Dallas area who choose to attend Santa Clara because they seek the individualized education that the school provides. An overwhelming majority of our families sacrifice greatly to send their children to Santa Clara.  The seven elementary and four middle schools identified as our students’ home schools, which are a part of Dallas Independent School District, are ranked as low performing or unacceptable, mostly as a result of the overcrowding and behavioral issues that those school face.  Santa Clara is the only choice for parents wanting a values-based school with a safe, secure environment, a rigorous curriculum, and caring and nurturing teachers.  Many of our students are from single parent families, and others are raised by grandparents or other relatives.  As a result of these hardships, very few of our parents are able to help us with fundraising, gifts, or even time commitments.

We target a traditionally underserved population. The racial and ethnic makeup of the school is 95% Hispanic; 3% Caucasian; 1% African American; and 1% American Indian/Alaskan Native, of which 54% are female and 46% are male. The Santa Clara community has 203 students, and at least 81% receive some amount of tuition assistance. The Diocese of Dallas awards 41% of the $240,000 total tuition assistance given to Santa Clara Academy. Each year approximately $140,000 must be raised directly by the school for financial aid for families.

A demographic study of our student population illustrates some of the challenges Santa Clara faces; 64% of our student population lives in a household that qualifies as low-income, near poverty, or at poverty; 29% are native Spanish speakers who speak Spanish at home. Forty-one percent of the 2014-2015 student population had deficiencies as determined by Iowa Test Basic Skills (ITBS), a norm referenced test administered to K-8th grade students. However, with high expectations, tutoring, enrichment and resource programs, 99% of our eighth grade students graduate to high school.

From a typed document dated 1995-Author Unknown: "During the 1980's, record numbers of young Hispanic families settled within the boundaries of St. Cecilia's Parish in West Oak cliff. When even a fraction of the 40,000 people who had participated in the 1990 census attended Mass in the West Davis Church, the building was filled to capacity.
To remedy the overcrowding and to comply with fire ordinances, Reverend Edmundo Paredes, pastor of St. Cecilia, requested a division of his parish. Bishop Charles V. Grahmann and the Presbyteral Council voted to establish a new parish and on February 14,1993 Santa Clara Parish was established to serve its people. Prior to the official declaration of the new parish the Bishop conducted an in-depth year-long survey to determine what special needs existed in the area. Job opportunities and living conditions were among the most voiced needs, but invariably, the parents articulated an even greater need for a catholic school where their children could receive an education without fear of the deterrents of crime- an education where they could be prepared to receive the Holy Sacraments.
St. Clare Catholic School began operation in the Fall of 1994. Initially, it  provided instruction for students 6-8th grades. The decision for this grade configuration was to make an immediate impact on the youth who had reached the most important years of their lives. Statistics indicate that children who attend catholic schools seldom drop out of school and are more successful as adults."

1995 news article about Santa Clara Catholic Church- and the mission they began for not only the faith community, but our school as well! 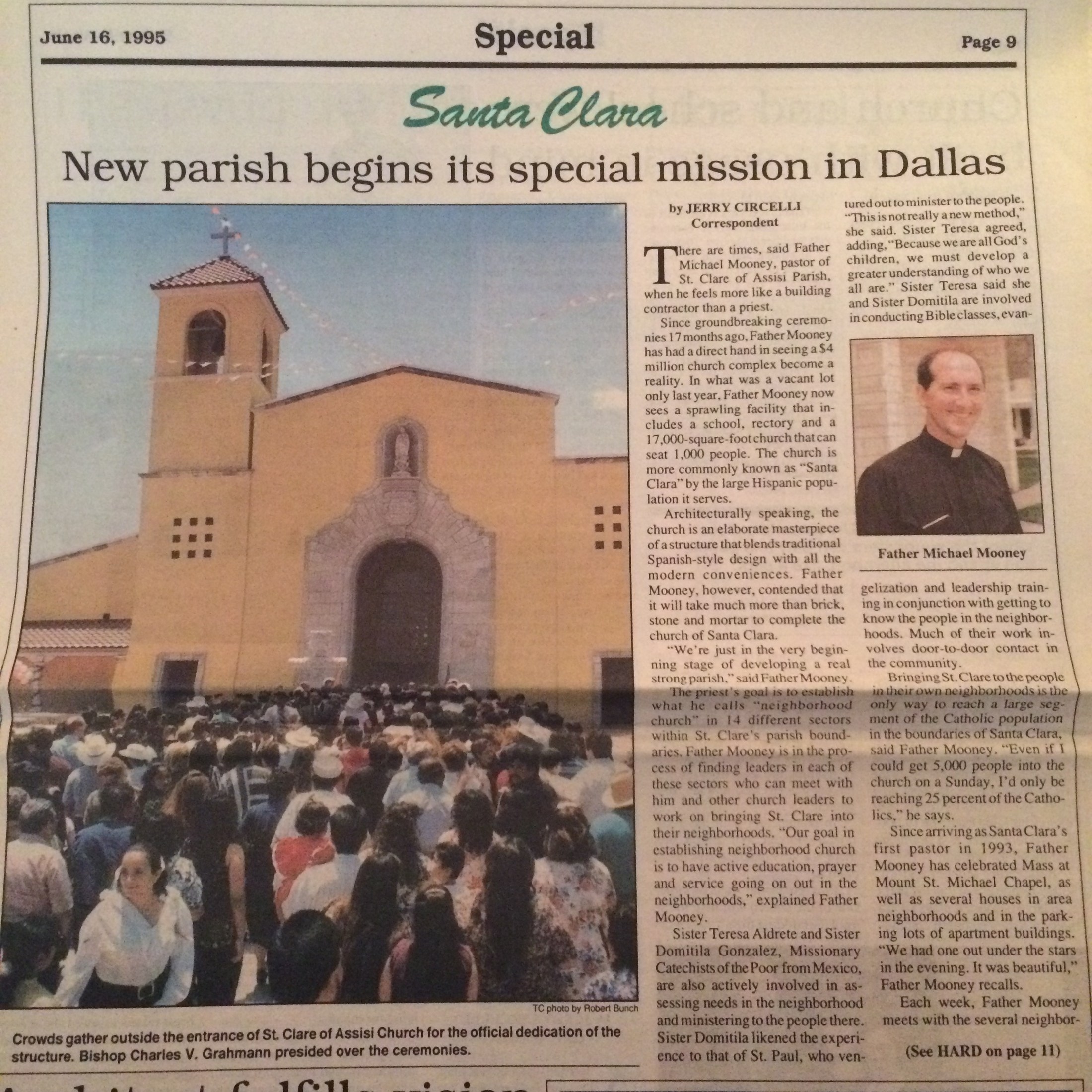